Glenmorangie’s Astar is a sweet, creamy dram perfect for a cold evening

Glenmorangie has been owned by Moet-Hennessy since 2004 and is the fourth-most sold single malt in the world. The distillery is located in the northern Highlands and it never occurred to me that it was a coastal distillery. Unlike many other coastal distilleries, Glenmorangie never plays on the idea of it being a coastal whisky. The marketing doesn’t focus on seafarers tall-tales nor do the tasting notes say anything about casks in a warehouse being battered by the waves and imparting that maritime influence. However, it is very much a coastal- as evidenced from the fact you can almost feel the sea spray as you visit the distillery and when we were there we saw a seal cavorting just off-shore (for real!). The distillery is a beautiful place with narrow lanes, grey brick buildings and cherry-red painted doors. It has twelve stainless steel washbacks and six pairs of stills which they claim to be the tallest stills in Scotland. Apparently they are the height of a giraffe! Animal comparisons aside, the stillroom is truly an awe-inspiring sight and it also produces an awe-inspiring 6 million litres a year.

There are a lot of different expressions in the Glenmorangie. The core range has consisted of the Original (10 year old), 18 year old and 25 year old, but the 25 year old has now been discontinued (although the tour guide hinted that it might comeback when the older stocks replenish in a few years). There are three different 12 year old expressions that begin maturation in bourbon barrels but are finished in different casks; the Quinta Ruban (port), Nectar D’Or (sauternes) and the Lasanta (sherry). These three are all crowd-pleasers. At my birthday party last year my supposedly ‘non-whisky-drinking’ friends drank the bar dry of the Quinta Ruban. I admit that it does go down quite easily! There is also the high-end core expression Signet (bottled with a satisfyingly weighty stopper) which is made using 20% chocolate malt. Finally, there is a myriad of travel-retail and annual Private Edition expressions, all with beautiful Gaelic names such as Sonnalta, Finealta, Artein, Ealanta, Companta, Tusail, Tayne, Duthac and my favourite Milsean. Phew that’s a lot! The dram that I am reviewing today is a slightly older Limited Edition release from 2008 called Astar. 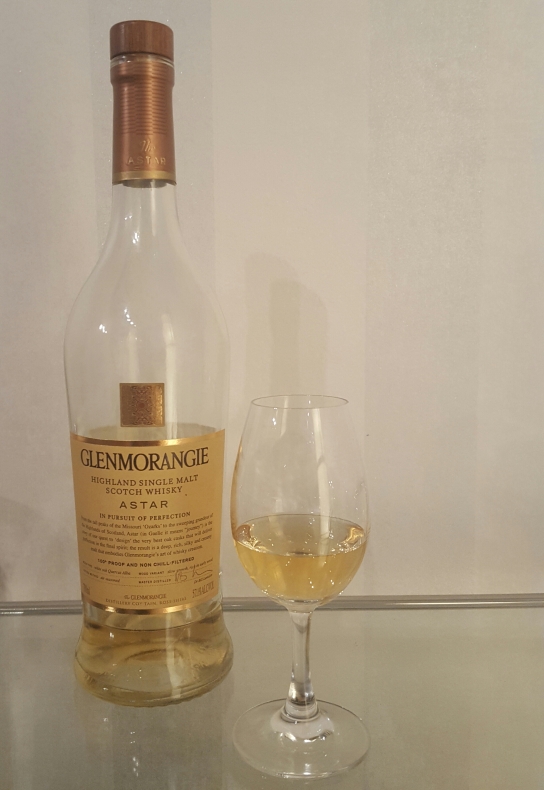 Astar means ‘journey’ in Gaelic. This dram certainly is a journey and the destination is delicious. It is bottled at 57.1% but is deceptively light considering the high ABV. I do not find it rough around the edges like some bottled at this strength. Matured in bourbon barrels made from slow-growing Missouri oak, it has all the rich and spicy bourbon characteristics that you would typically expect. The colour is a glowing golden hue.

Palate: Orange sherbet from my childhood, moving into vanilla custard and crème brulee. Some pineapple, a little hint of mint freshness cutting through the sweet notes at the end.

Finish: A lovely lingering ginger warmth, and honey. Perfect for a cold evening.

I really enjoyed this dram, it is sweet and creamy. If you can still find a bottle somewhere then Astar is certainly one to get your hands on. But think twice about letting your ‘non-whisky-drinking’ friends join you for a dram though, they might drink you dry of it. 😉

One thought on “Glenmorangie Astar”