A side by side comparison looking at the different effects of distillation and maturation.

Here we return to Mortlach, a Speyside distillery that I am fascinated with because it produces such an intriguing array of flavours in its whiskies. A few months ago I reviewed the independently-bottled Wemyss Malts ‘Ginger Glazed Gammon’ and if you want to brush up on the general information about the Mortlach distillery and its idiosyncratic distilling process you can find that here. Since that earlier post I have been lucky enough to try some additional drams from Mortlach. Moving from the independent bottlings to the official distillery bottlings, my palate has now run the gamut of the Mortlach core range all the way from the (presumably) younger NAS bottlings through to the venerable 25 year old.

In this particular review we’ll cover the two NAS offerings: the Rare Old and the Special Strength. The Rare Old is the opening gambit in the newish Mortlach range that Diageo launched in late 2014. It is bottled at 43.4% ABV, and was matured in a mix of four different types of casks: bourbon, sherry, refill bourbon and recharred barrels. The Special Strength is apparently pretty much the exact same liquid, but bottled at a higher 49% ABV and released as a Travel Retail Exclusive. Hunting down this particular bottle helped me while away some of the time during my long layover at Changi airport earlier this year! Because of the close similarities between the Rare Old and Special Strength they provide an interesting side-by-side tasting comparison. So, how exactly does this slight increase in proof impact on the profile of these whiskies? 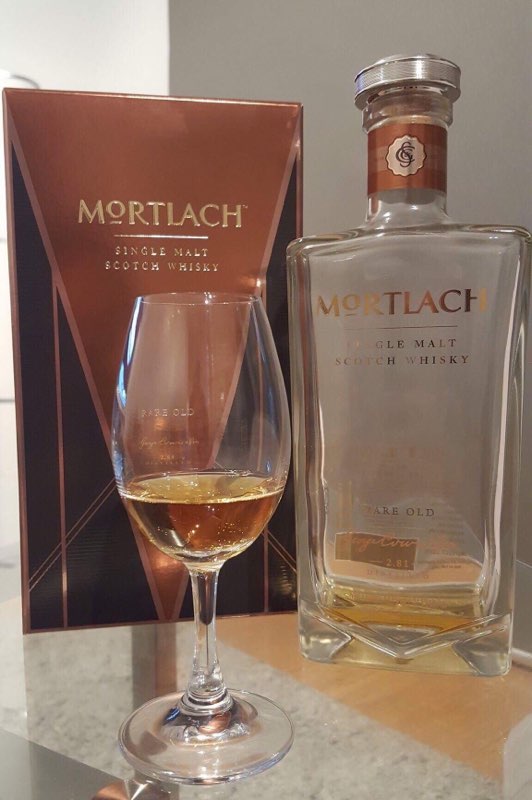 Nose: Butterscotch at first sniff and then a refreshing hit of menthol, opens up into honeycomb, roasted pineapples and glazed ham with burnt bits, a big hit of red apple.

Palate: Initially spicy then mellows into quite a light dram; prunes, ham steaks, wood (that hot dry wood from a sauna), tobacco and drinking cocoa.

Finish: Honeycomb (Violet Crumble – a classic Aussie chocolate bar for those who may be overseas!) and treacle tart

Whilst these two bottlings are undeniably similar and both carry the signature Mortlach notes of sweetness and meatiness, the difference in proof makes them distinctly different. Whilst the Special Strength’s higher proof translates to an initially harsher mouthfeel, this difference is reflected more deeply in two whisky’s flavour profiles as well. In particular, the sweetness in the Rare Old come through more fully, whilst the spicy notes are more to the fore in the Special Strength. Taken together, they provide an interesting study in the impact the distillation has on the whisky as opposed to the cask maturation. Both are lighter and less challenging than some of the other ballsy Mortlachs out there; they definitely go down easily and make a good summer dram.

In the coming week I’ll finish off my look at the Mortlach core range with reviews of the 18 Year Old and 25 Year Old. As we approach the festive season stay tuned for more interesting drams!